1977 Prize of Council of Ministers of the USSR

2003 Diploma of Verkhovna Rada of Ukraine

2008 Honoured Worker of Science and Technology of Ukraine

2012 The Order of Prince Yaroslav the Wise, V degree

The study on intercellular informational interactions

The development of gene therapy for diabetes type-1 and atherosclerosis.

A series of recombinant vector DNAs containing the human full-size preproinsulin and apolipoprotein A1 genes in the integrative expression cassettes have been constructed in the Department. The mammalian cell lines that express the target human proteins were obtained. Vector DNA polyplexes based on modified polyethyleneimine containing glycoside ligands have been optimized for efficient and safe targeted gene transfer in mammalian liver cells. The consistently reproducible technique for obtaining experimental models of chemically induced diabetes in animals of four species (mice, rats, rabbits and pigs) has been perfected. The models of alimentary hypercholesterolemia and of lipid metabolism disorders under diabetes, induced by streptozotocin in rabbits, have been developed. Therapeutic efficacy of targeted vector DNAs has been demonstrated in long-term experiments with these animal models (Fig. 1): a) antihyperglycemic action of polyplexes containing human preproinsulin gene in the model of type 1 diabetes in mice, rats, rabbits and pigs; b) antiatherogenic effects of polyplexes containing human apolipoprotein A1 gene in the models of alimentary hypercholesterolemia and combined carbohydrate and lipid metabolism disorders in rabbits. 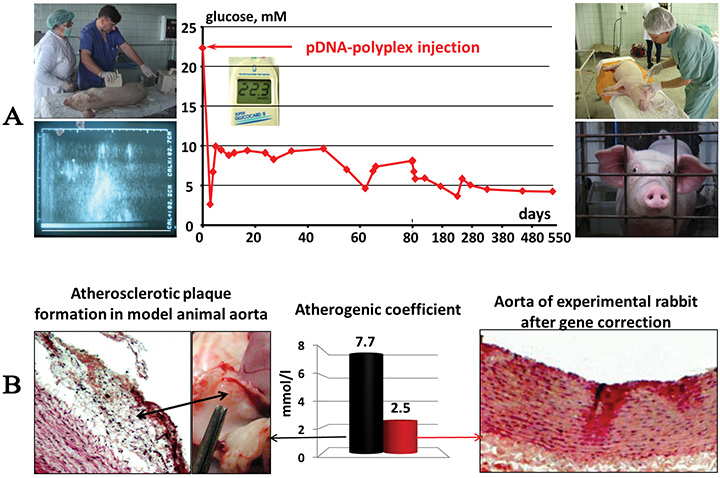 Fig. 1. a – Gene Therapy Correction of Streptozotocin-induced Diabetic Hyperglycemia in Landras Swine, b – Gene Therapy for Experimental Hypercholesterolemia in Rabbits

A technology of MSC isolation from human umbilical cord Wharton jelly with maximal preservation of their native characteristics has been developed. The necessity of individual approach for the cells obtaining from umbilical cord was confirmed. The optimal culturing conditions, in particular, considering an influence of gas mixture were determined. It has been shown that lowered oxygen concentration and nitrogen substitution with argon had positive effect on the umbilical cord MSC during their cultivation. The morphological characteristics as well as surface markers expression were studied. MSC from umbilical cord were shown to be heterogeneous at isolation (0 passage), but already at the first passage they had typical for MSC spindle-shaped morphology. They were CD73, CD90, CD105 positive and CD34, CD45 negative, which is characteristic of MSC. After the second ex vivo passage (Fig. 2), gradual change of the MSC properties occurred (cell morphology, surface markers expression, doubling time, etc.), as well as spontaneous differentiation to adipo- and chondrocytes began. Accordingly, only the cells of this or lower culture level passage can be used. Collagens I and II types were extracted, and matrices for the cell cultivation were prepared. 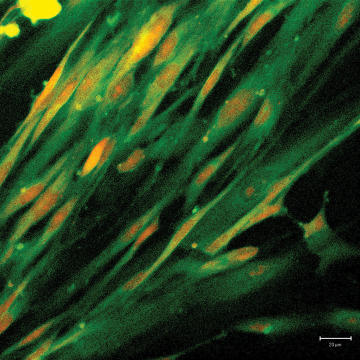 In recent years, the use of transplanted cells producing active factors has been proven to be an emergent technology. However, the transplantation of allogenic and xenogenic cell material results in the immune rejection of cell transplants. Cell microencapsulation is a promising tool to prevent an attack of immune system even in case of xenogenic transplants. Microcapsules, prepared from semipermeable membranes, ensure transmission of target proteins, on the one hand, and defend the cells from attacks of immune system – on the other. It makes possible to avoid the use of long-term therapies of modulating and/or immunosuppressive agents, which have potentially severe side-effects. Usage of encapsulated cells, producing growth factors, cytokines, hormones and other therapeutic proteins, is at present a very promising way of delivery of therapeutic material into an organism. The Department takes part in this field of research. The genetically engineered cells are a source of therapeutic proteins. Transgenic mammalian cell lines producing some important recombinant human cytokines (LIF, FGF2, IL10) have been obtained by us via a nonviral gene transfer technique. The recombinant protein secretion into the cultural medium was shown. When the cells producing cytokines were encapsulated in alginate microcapsules, the production of the recombinant cytokines was continuing and the cytokine molecules are secreted from the microcapsules into the cultural medium (Fig. 3). The therapeutic effects of the cytokines, produced by genetically modified eukaryotic cells, are planned to be tested on animal models when the microcapsules will be transplanted to animals suffering from some disordes caused by the lack of tested cytokines.

The study on influence of recombinant cytokines on structural and functional state of ischemic tissues. 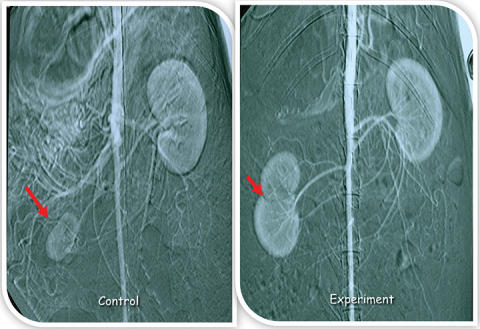 Fig. 4. Angiogram of vessels of rabbit urinary system after 6 months the application of ligatures on the upper pole of left kidney. The place of the ligature application shown by arrow

Projects of State Agency on Science, Innovations and Informatization of Ukraine: