Since 2003 Head of the Department of Cell Signaling, IMBG NASU, Kyiv, Ukraine.

Since 1998 Member of FEBS (Federation of European Biochemical Societies)

Since 2004 Member of Ukrainian Society of Cell Biology

Since 2007 Editorial Board member of Journal “Biopolymers and Cell” (Ukraine)

Since 2011 Editorial Board member of Journal “Biotechnologia Acta” (Ukraine). 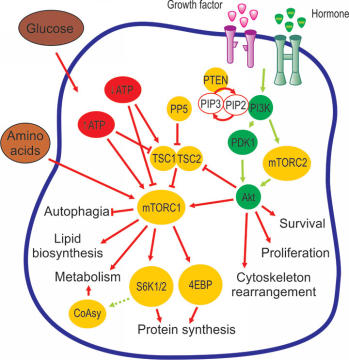 Fig. 1. The PI3K/mTOR/S6K signaling in regulation of cell functions

Ribosomal protein S6 kinases (S6K1 and S6K2) are principal regulators of cell size, growth and methabolism. Functional peculiarities of S6Ks and their splicing isoforms in normal tissues and malignant tumours, their expression profile and subcellular localisation are under investigation. We provide evidence of existence of the mTOR splicing isoform, mTORβ, which lacks most of its protein-protein interaction modules, HEAT and FAT, but retains domains responsible for FRB, protein kinase activity, and regulation (RD and FATC) (Fig. 2).

Importantly, mTORβ could form complexes in vivo with Raptor and Rictor, which are known companions of full-length mTOR (mTORα). Also, it readily phosphorylates characterized mTORβ substrates, S6K1, PKB/Akt, and 4EBP1, in vitro. In contrast to mTORα, mTORβ has the potential to shorten considerably the G1 phase of the cell cycle and to stimulate cell proliferation. Significantly, overexpression of mTORβ transforms immortal cells and is tumorigenic in nude mice. Our studies suggest that the regulation of cell proliferation via the mTOR pathway could be mediated by mTORβ, which acts as a protooncogene and therefore could be a candidate for future anticancer drug discovery.

The question about relationship between cancer and stroma cells requires additional comprehensive analysis. Earlier it was shown that fibroblasts are capable to inhibit the growth and proliferation of tumor cells in the early stages of oncogenesis, whereas in the later stages activated tumorassociated fibroblasts, demonstrate the ability to stimulate proliferation, invasion and angiogenesis. Three-dimensional culture is promising way of modeling the different stages of carcinogenesis in vitro . This approach allows to reproduce some morphological and molecular characteristics of initial tissue more precisely than traditional monolayer culture. For investigation of tumor-stroma interaction in context of PI3K/mTOR/S6K signaling 3D culture model of human dermal fibroblasts and malignant cells was developed.

Recently we have identified PP5 as new binding partner for TSC2, a component of TSC1/2 complex and demonstrated that PP5 dephosphorylates specifically TSC2 at sites, associated with its activation via AMP kinase (AMPK) pathway. Taken together, these results suggest that PP5 exerts negative regulation on TSC1/2 function through dephosphorylation of AMPK-mediated sites and in turn positively regulates mTOR activity.

Molecular cloning and characterization of CoA synthase (befunctional enzime that is responsible for the last two steps in CoA biosynthesis) interaction with S6K1 uncovered a potential link between mTOR/S6K signaling pathway and energy metabolism that requires CoA and its thioester derivatives, but its physiological relevance should to be further elucidated. 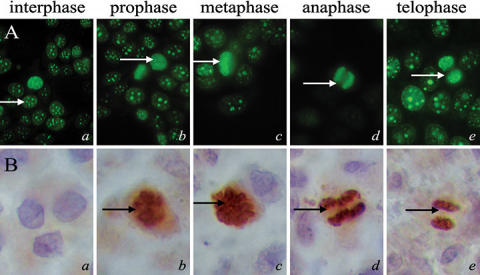 Application of SEREX methodology (SErological analysis of Recombinant cDNA EXpression libraries) allowed to identify more than 100 autoantigens of colon, thyroid, melanoma and medullary breast carcinoma tumors. Among them Ki-67, catenin beta like1, α-catenin, HSP 105, ovarian cancer biomarker - sodium-dependent phosphate transporter NaPi2b, LGALS3BP, RAD50, FAM50A, RBPJ, PABPC4, LRRFIP1. Characterization of their gene expression profile in different type of malignancy, subcellular localization and immunogenicity in sera of cancer patients led to identification of potential molecular markers of human malignancy which can be used for both diagnosis and therapy of oncological diseases, and for the understanding of the molecular mechanisms of malignant transformation of cell, tumor progression and anti-tumor immune response (Fig.4). 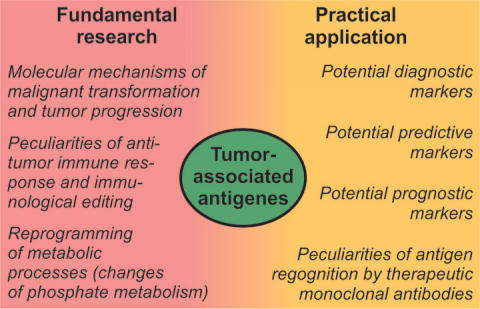 Projects of State Fund for Fundamental Researches of Ukraine: