since 1992 Head of the Department of Functional Genomics IMBG NASU, Kyiv, Ukraine

since 1989 Member of European Association for Cancer Research (EACR)

since 1994 Member of Committee of EACR

since 2005 Editorial Board member of Journal “Gene” (The Netherlands)

since 2009 Editorial Board member of Journal “Biopolymers and Cell” (Ukraine)

2004 Gershenson Award of National Academy of Sciences of Ukraine

The role of adaptor/scaffold proteins in the formation and regulation of multiprotein complexes during endocytosis, signal transduction, actin polymerization, viral infections and neuronal functioning

Regulation of gene expression at the level of alternative splicing

Identification and characterization of cancer–related genes

Scaffolding proteins of ITSN family are crucial for the initiation stage of clathrin-mediated endocytosis. Moreover, they regulate actin cytoskeleton rearrangements, cell signalling and survival. Abnormalities of expression of ITSN1 gene, which is located on chromosome 21, are associated with the endocytic anomalies reported in patients with Down syndrome and Alzheimer’s disease. Our studies are focused on identification of novel ITSN interacting proteins and their functional significance, as well as determination of the mechanisms of posttranslational regulation of ITSN family. We have identified 11 novel protein partners of ITSN1 and ITSN2 implicated in endocytosis, cell signal transduction, actin cytoskeleton rearrangement and maintenance of virus latency. We have shown that latent membrane protein 2A (LMP2A) of Epstein–Barr virus forms a complex with ITSN1 and regulates its phosphorylation. ITSN2 was found to undergo tyrosine phosphorylation in a growth factor-dependent manner. Using Xenopus animal model we have demonstrated the role of ITSN2 in the coordinated changes of actin cytoskeleton during early embryonic development.

Fig. 1. Schematic representation of the proteins that interact with ITSNs

The role of alternative splicing in the modulation of functions of ITSN1.

We identified six novel splicing events of ITSN1 transcripts that do not introduce premature termination codon. Different combinations of these splicing events could generate 28 isoforms of ITSN1. The isoforms differ in their domain organization, interaction with protein partners, localization in different tissues and stages of development. The role of alternative splicing was clearly demonstrated in case of ITSN1 microexon 20 splicing that provides a mechanism for tissuespecific control of protein–protein interactions in neurons. Using mutational analysis we found that neuron-specific insertion of a microexon 20 leads to regulation of the SH3A domain specificity due to the shifting of negatively charged amino acids towards the interaction interface. Neuronspecific isoform of the SH3A domain binds with significantly higher affinity endocytic proteins dynamin 1 and synaptojanin 1, as well as GTPase-activating protein CdGAP, while the ubiquitously expressed isoform preferentially interacts with signalling proteins Sos1 and Cbl. We also detected the shortest ITSN1 isoform with an alternative C-terminus encoded by exon 22a. We demonstrated intramolecular binding within ITSN1- 22a that negatively regulates its association with the ubiquitin ligase Cbl.

Fig. 2. 3D models of the ubiquitously expressed and neuron-specific form of the SH3A domain. Side chains of the conserved hydrophobic residues are depicted in yellow, negatively charged amino acids are in red

Investigation of the role of ITSN1 in the synaptic transmission and plasticity.

We identified a stable tubule-only polypeptide (STOP) as an ITSN1-binding protein using affinity chromatography followed by MALDI-TOF mass spectrometry. STOP and ITSN1 were shown to form a complex in vivo and to partially colocalize in rat primary hippocampal neurons. STOP is a microtubule-stabilizing protein that is required for several forms of synaptic plasticity in the hippocampus. Identification of this interaction raises the possibility of ITSN1 participation in this process. Elucidation of the functional significance of ITSN1-STOP interaction in neurons is in progress. 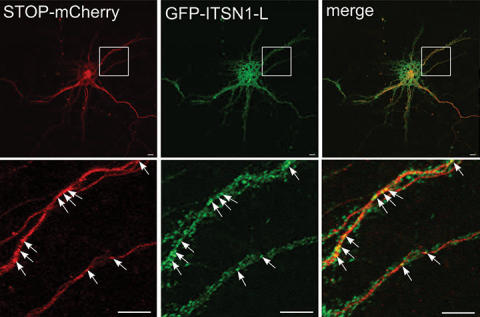 Fig. 4. Primary hippocampal neurons (14–21 DIV) were plated on coverslips and transfected with pmCitrine-N1. The cells were fixed in formaldehyde 48 h post-transfection, blocked in 2 % BSA and sequentially stained with anti-ITSN1 and anti-STOP antibodies, which were visualized by anti-rabbit Alexa 405 and anti-mouse Texas Red conjugated IgG, respectively. Scale bars=5 μm.