Laboratory of Biosynthesis of Nucleic Acids

The Laboratory was established on the basis of the Department of biosynthesis of nucleic acids (former head Corresponding Member of NASU, Prof. Kavsan V.M.).

2003 Ph. D. (molecular biology). Thesis: "Characterization of novel genes on human chromosome 21 and identification of their homologues in mouse"

from 2018 Head of the Laboratory of Biosynthesis of Nucleic Acids, IMBG NASU, Kyiv, Ukraine

since 2007 Member of FEBS (Federation of European Biochemical Societies)

Clarification of the role of potential oncoproteins interactions and tumor suppressor proteins in RAS/MAPK and PI3K/AKT signaling cascades, involvement of these interactions in the malignant transformation of brain cells, proliferative and invasive properties of tumor cells and search for specific inhibitors of these signaling pathways

Determination of the role of the endogenous retrovirus gene env (ERVW-1) in the interaction of cancer cells with microenvironment and in the regulation of carcinogenesis, which will allow estimating the predictive value of ERVW-1 in the treatment of cerebral and colon cancer. The experimental data obtained will serve as a fundamental basis for the development of new promising therapeutic approaches to cancer treatment.

Hundreds of genes expression changes have been revealed in tumors of glial and meningial origin by modern methods of expression genetics. Opposite changes of several genes expression suppose different mechanisms of these tumors development and can be used as molecular biomarkers. 129 genes with 5-fold changed expression were found in glioblastoma, the most aggressive human brain tumor. 44 of them were overexpressed genes, which participate in angiogenesis, immunity, ECM, cell signaling pathways, and related to the IGF-system. IGF1 is a key peptide in many tumors but its gene was not found as overexpressed in glioblastoma. It was shown that CHI3L1 gene with considerably increased expression could participate instead of IGF1 in the development of glial tumors.

The new human cell line stably producing CHI3L1 was constructed and found that these cells had an accelerated growth rate and could undergo anchorage-independent growth in soft agar that is one of the most consistent indicators of oncogenic transformation (Fig. 1).

293_CHI3L1 cells had activated PI3K and MAPK pathways; phosphorylated AKT was localized in cytoplasm, while ERK1/2 were localized in both cytoplasm and nuclei where they could activate different transcription factors with certain biological outcome. The formation of tumors in rats by 293 cells expressing CHI3L1, evidenced that CHI3L1 is an oncogene which is involved in tumorigenesis. It was the first animal model of human brain tumor which could be used for studying of various biological properties of brain tumors in the immunocompetent animals (Fig. 2). 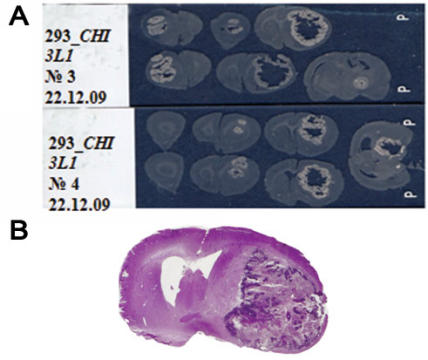 Fig. 2. Malignant tumors in the rat brain after stereotactic intracerebral implantation of 293_CHI3L1 transformed cells. A – 293_CHI3L1 cells were implanted under ketamine anesthesia in kaudoptamen using Narishige stereotactic device, according to the coordinates of Swanson’s Brain Atlas. B – General view of tumor paraffin section, initiated by 293_CHI3L1 cells. Hematoxylin-eosin staining

It was found that CHI3L1 gene promotes chromosomal instability. Constitutive expression of CHI3L1 leads to qualitative and quantitative chromosomal abnormalities, contributes to the malignant phenotype by accelerating cell proliferation, and also increasing the genetic heterogeneity of cell populations (Fig. 3). 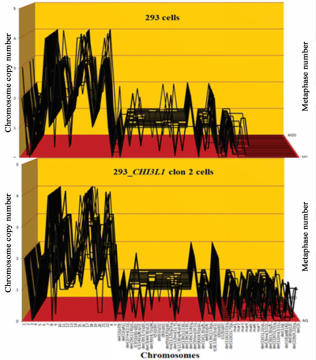 CHI3L1 gene knockdown by CHI3L1 siRNA transfection gave noticeable CHI3L1 protein blockade (80-90 %) with significantly reduced. pERK1/2 and the colony-forming ability of 293_CHI3L1 cells in soft agar (Fig. 4). The obtained results demonstrate that activity of CHI3L1 mediated by pathways involved ERK1/2 and AKT has a growth-promoting role during tumorigenesis and indicate that efforts to inhibit its activity should be considered during cancer therapy. 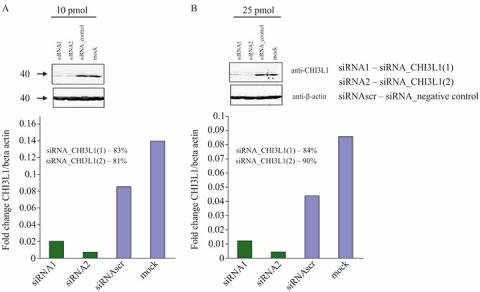 Along with superexpressed genes, it was found 85 genes relating to the potential tumor suppressor genes. The results show that CHI3L2 is an antagonist to CHI3L1 and if CHI3L1 is a real oncogene that may play an important role in tumorigenesis, CHI3L2 is anti-oncogene. A spatial model of CHI3L2 protein was constructed and it was revealed the main structural features that distinguish it from the homologous one but functionally opposite CHI3L1 protein (Fig. 5). Heparinbinding site of CHI3L1 has been identified using site-directed mutagenesis and it has been shown that it might be responsible for the oncogenic properties of CHI3L1.

The antiproliferative properties of two distinct classes of molecules, namely bradykinin (BK) antagonists and azolidinones, were shown in three different in vitro models of malignant transformation: 293 cells, stably transfected by CHI3L1 oncogene (293_CHI3L1), human glioblastoma cells U373 and mantle cell lymphoma (MCL) cells Granta, JeKo, Mino, and UPN1 (Fig. 6). For drugs delivery into the brain tumors are used the nanocojugates of Polycefin on the basis of polymaleic acid which can penetrate across the blood-brain barrier.

Fig. 6. Inhibition of 293_CHI3L1 and U373 cells growth by bradykinin antagonists 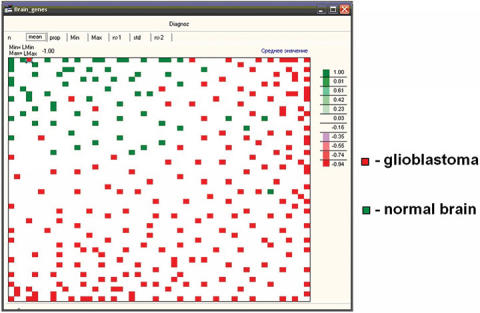 Projects of Ministry of Education and Science of Ukraine: