Since 2009 Head of the Department of Synthetic Bioregulators, IMBG NASU, Kyiv, Ukraine

Since 2002 Member of International Society of Nucleosides, Nucleotides and Nucleic Acids

Since 2005 Editorial Board member of Journal “Ukrainica Bioorganica Acta” (Ukraine)

Since 2009 Member of the American Chemical Society

Since 2010 Editorial Board member of Journal “Biopolymers and Cell” (Ukraine)

1993 Honorary Diploma from the NASU

2001 State Prize of Ukraine in Science and Technology

Chemistry and biological properties of nucleosides, nucleotides and oligonucleotides, their analogs and conjugates

Achievements Design of low-molecular ligands of G-quadruplexes and study on their interaction with quadruplex DNA. Telomerase inhibitors.

Design, synthesis and structure optimization of heterocyclic ligands of G-quadruplex DNA (G4) is being performed. The enzymatic test system TRAP (Telomeric Repeat Amplification Protocol) has been introduced to analyze the effect of new compounds on telomerase activity in vitro. A number of compounds (porphyrins, cyanines, phenazine derivatives) have been found to efficiently inhibit telomerase at micromolar concentrations. Enzyme inhibition by these compounds is based on their binding to G-quadruplex structures of telomeric DNA (Fig. 1). 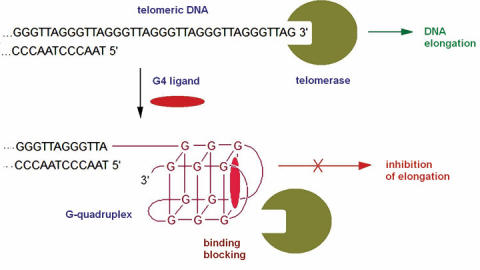 Spectral-fluorescent studies of the interaction of some inhibitors (first of all, porphyrin derivatives) with quadruplex DNA allowed determining their binding modes that include intercalation and external binding, as well as aggregation. Simple G-quadruplex models, G-quartets and octets, have been developed that allowed computer modelling of ligand–quadruplex interactions using semi-empirical and non-empirical quantum chemistry approaches. An optimized model of full 22-mer DNA quadruplex Tel22 (PDB 1KF1) has been introduced to determine the geometries and energies of G4 complexes with low-molecular ligands. In addition to semiempirical methods, a hybrid QM/MM approach ONIOM2 has been successfully applied for molecular modelling of this complex system (Fig. 2). 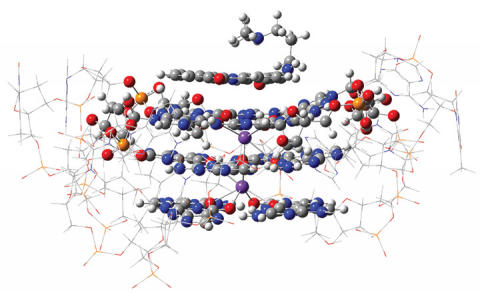 Inhibitors of topoisomerase I based on condensed heterocyclic systems.

A series of potential topoisomerase I inhibitors have been synthesized and tested in enzymatic DNA relaxation system in vitro. New compounds include benzimidazole and phenazine derivatives and amino-substituted cyanines. A number of compounds were found to completely inhibit the enzyme at 1-2 μM concentration. Investigation of their interaction with DNA and topoisomerase complex using biophysical and electrophoretic methods allowed identifying inhibitors that bind efficiently to DNA, as well as compounds interacting with enzyme or enzymatic complex. Some cyanines form highly fluorescent complexes with DNA and RNA and thus are suitable for sensitive visualization and quantification of picogram quantities of nucleic acids in electrophoretic gels (Fig. 3).

Novel aminespecific dioxaborine polymethine dye was successfully applied for the fluorescent labeling of proteins, both in the solution and in electrophoretic gels. Conjugation of this stable dye to proteins does not require any activation and results in ca. 80fold emission increase that makes it a convenient label for protein staining in the gel (Fig. 4).

A number of new silica-based supports for solid phase oligonucleeotide synthesis containing efficient linker groups were proposed. Polymeric carriers for the delivery of various therapeutic oligonucleotides and proteins including e.g. interferons have been developed which are mainly based on functionalized and cross-linked polysaccharide matrices (dextran, hyaluronic acid, heparin etc) or polyethylene glycol. We have introduced a new simple method for the preparation of amine-modified polysaccharide hydrogels based on periodate oxidation of sugar residues followed by a partial cross-linking of the formed aldehyde groups with aliphatic diamines. Dextran hydrogel nanoconjugates containing covalently attached telomerase inhibitor, TMP3 porphyrin (drug content 10-20 μM/g), have been obtained. A number of organic and inorganic affinity sorbents with immobilized proteins, antibodies and low-molecular ligands were developed for biotechnology and molecular biology research (Fig. 5,b). 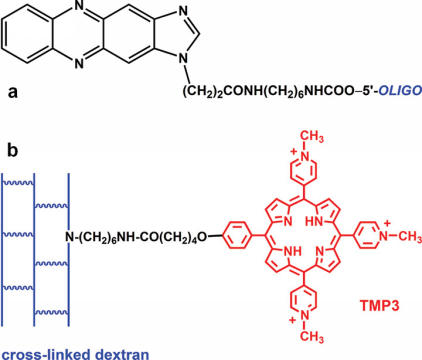 Fig. 5. The structure of bioconjugates: a – imidazophenazine-oligonucleotide; b – cross-linked dextran modified with telomerase inhibitor TMP3

Projects of National Academy of Sciences of Ukraine